Safe environment for everyone

As en employee you dedicate a lot of your time and effort in working hard to achieve results and successes. This time is spent in your workplace should be in an environment that is safe and productive for daily operations without fear or safety concerns. Everyone should be protected from all degrees of threats and necessary precautions put in place.

Did you know that every 60 seconds, a working adult touches as many as 30 objects which may be contaminated by bacteria or viruses causing infectious disease?  According to one recent workplace microbial survey, "desktop surfaces, computer keyboards, mouse and telephone receivers are more contaminated than restroom toilet seats."

Enclosed environments, where people are working or interacting in close proximity with one another, are particularly at higher risk of the spread of germs. With people often working or moving around public areas while ill, this can quickly lead to localized outbreaks among a larger number of people.

Since our hands are responsible for the spread of 80% of common infectious diseases, effective hand hygiene continues to be universally recognized as the smartest, most cost effective means of infection control in the workplace.

What really lives on our equipment?

We swabbed 30 tablets, 30 phones and 30 office keyboards and sent the specimens off for analysis. The results showed that shockingly, many keyboards and tablets were dirtier than an office toilet seat. And in some cases we had to immediately inform the owners that their computer needed serious cleaning.

Enterobacteria, which can include strains of infection such as e.coli and other bugs that cause illness, was present in high-risk levels in 8 of the 30 tablets we tested. High-risk represents more than 1,000 units of enterobacteria per swab, which compares to 10 units per swab on the toilet seat we tested. Staphylococcus aureus, which can cause severe food poisoning, was found at high levels in three of the tablet and smartphones we tested. In one case we found a tablet with  a count of 600 units of staphylococcus aureus per swab. By comparison, the toilet seat we tested had a count of less than 20. 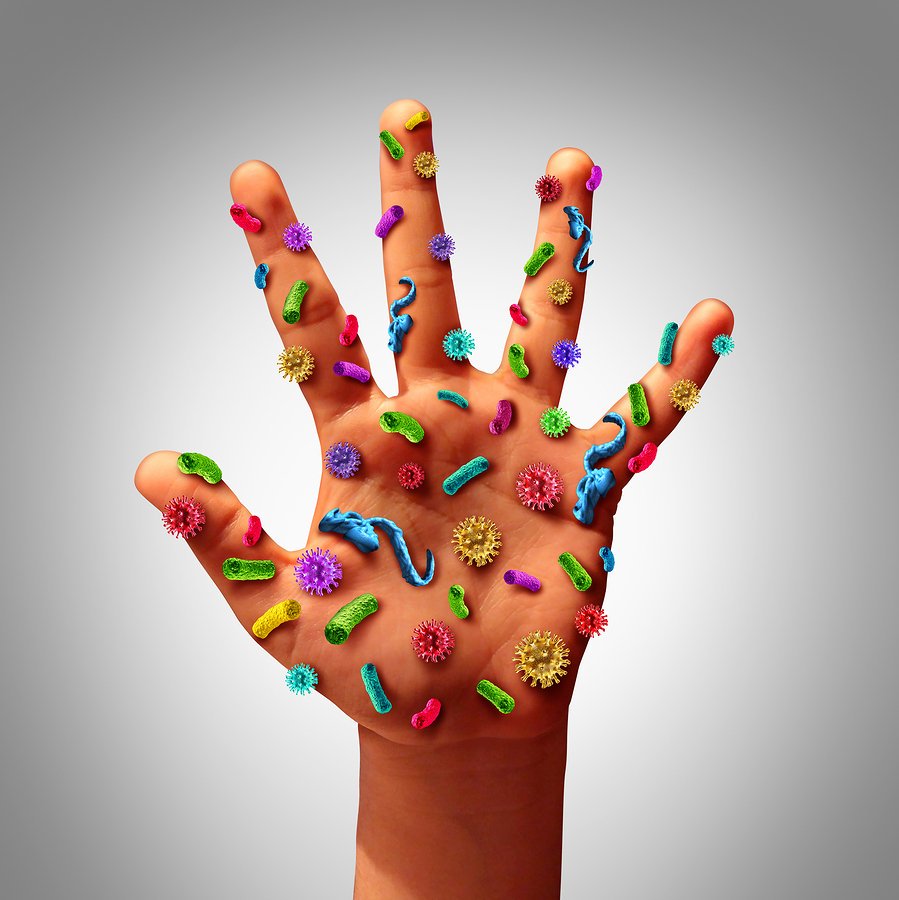 Many spend their day slaving over a keyboard unaware of the dirt and bacteria lurking between the keys, hidden on the mouse and nestled in your phone lies more than 10 million bacteria - 400 times more than on the average toilet seat. Bacteria and viruses can multiply on hard surfaces, remaining infectious for up to 24 hours, hygiene expert and visiting professor at the University of Salford, Dr Lisa Ackerley said the average desk is a prime breeding ground for infections, before urging people to disinfect their desks, telephones, keyboards and computer mice.

Now, a new infographic lays bare the stark reality of how important it is to detox your desk. It shows one in five workers fail to clean their workspace before eating, while two in three eat lunch at their desk, encouraging the growth of bacteria Twenty per cent of people never clean their computer mouse, while around 80 per cent of common infections are transmitted by touch.