Dust is a common allergen, and it gives electronics and other items an unsightly appearance when it begins to build up. However, dust can wreak far more havoc on the inside of a computer than on the outside. It is crucial to prevent dust and dirt from building up inside your computer, laptop or server as it can cause permanent visible damage to some components and cause others to fail. Excessive dust in a computer can cause a variety of heat-related issues. Dust that collects on components, such as memory modules, insulates them, preventing the air from the computer's fans from drawing the heat away. Dust that blocks a computer's intake and exhaust vents prevents cool air from entering the computer and hot air from escaping. Dust on the blades of a cooling fan causes friction, creating noise and preventing the fan from spinning smoothly. An overheating computer may operate slowly due to the processor's thermal protection feature, may be unstable and could experience early hardware failure.

Fans are the primary cooling system in most computers. They bring cool air into the case and push warm air out. They also blow air directly onto heatsinks which cool components like the central processing unit (CPU). Heatsinks are finned metal blocks that dissipate the heat generated by the chip they are seated to. The fins allow air to flow through them transferring the heat into the case which is blown out by a case fan. If any of these fans fail the system can become much hotter than it was intended to get. A plugged heatsink is worthless for cooling, it will get hotter and hotter with the component it is trying to cool. A sign of this happening is the computer becomes much louder as the fan has to spin faster and faster to perform normal duties. Don't ignore a louder than normal computer. Sometimes fans go quiet as well and could suggest that the fans have finally given up.

"ruin the computer causing damage due to excessive heat"

Computers with really dirty fans are louder than normal due to the fans having to run at higher speeds in order to cool the components. If your computer has gotten louder over time it is not because it is getting older, it is most likely due to dust and dirt build up. Ignoring the warning signs can possibly lead to a complete system failure. Having a professional come in can mean the difference between cleaning the computer, or possibly having to buy new parts, or even buying a new computer.

Just like a car over heating a PC will fire up and run again once it has had time to cool. However, once you turn it back on the cycle starts over again. Doing this over and over could potentially ruin the computer causing damage due to excessive heat. Not only potentially ruining the computer, but gradually corrupting the file system which may warrant reloading the operating system to repair the damage.  A computer with failed fans may work all winter long and then start to fail badly during summer months. 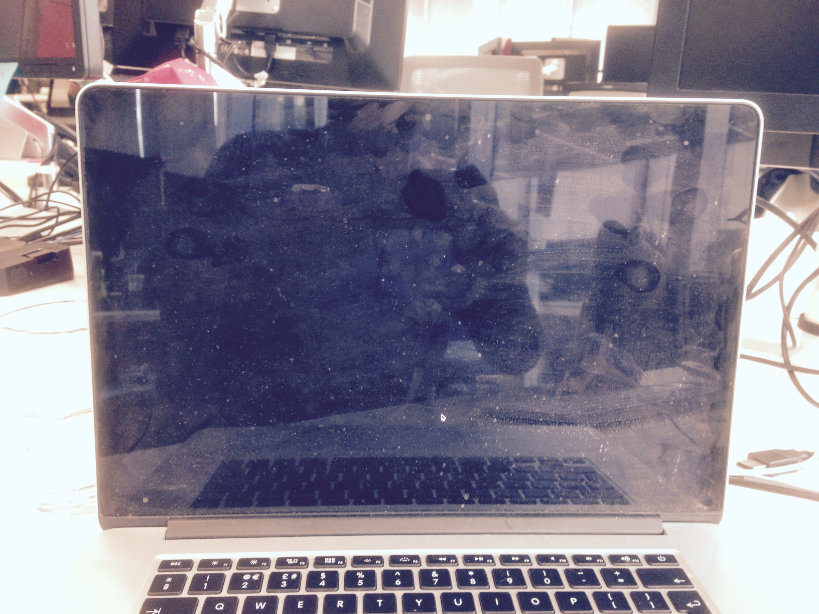 Effects of dust and dirt

Components covered in dust run much hotter than they were designed to, possibly causing the computer's central processing unit (CPU) to throttle performance. Throttling is a method used to prevent the CPU from overheating, the computer's performance drops significantly for no apparent reason. The computer becomes slow and unresponsive, similar to virus or malware activity. Some CPU's don't utilize throttling and the computer will simply shut off, or Windows crashes displaying a blue screen once the CPU begins to overheat. If the central processing unit does not take steps to protect itself it could damage the CPU. The damage caused by an overheating PC could lead to a myriad of problems, and symptoms making it harder to determine the source of the trouble when the PC is repaired. Thus driving up the cost of repair for a potentially bad computer.

A laptop screen or desktop LCD monitor has a delicate surface that is easily scratched by dust or a rough cleaning cloth. If you are not careful when cleaning a dirty screen, you may drag dust and dirt particles across the surface, leaving microscopic scratches that cause a visible "swirl" on the screen. It may not be possible to repair a screen damaged in this fashion.